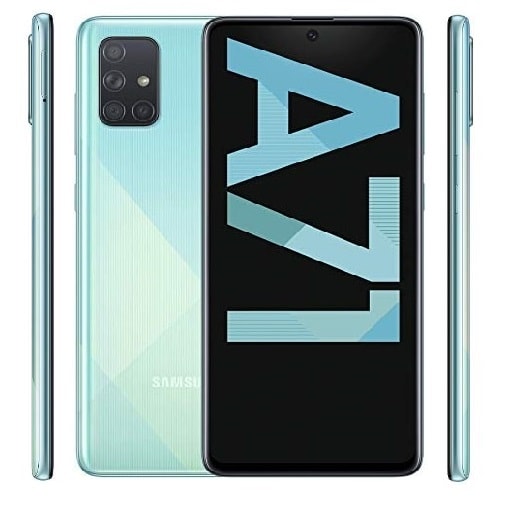 Either it appeals to many or not, it entirely depends on its price tag. If Galaxy A71 resembles Samsung’s Galaxy A70, it’ll then will a winner. The major specifications are solid but significant compromises such as non-availability of wireless charging and plastic back body will indeed disappoint many users.

It’s overall, however, good enough to consider buying with many attention-grabbing features such as the biggest display, a massive amount of RAM, a large number of cameras, a huge battery and, of course, a punch-hole camera. What else do you need from a mid-range smartphone at an attractive price point? Let us know in a comment section below!

Before the official release, you can buy Samsung Galaxy a71 in the UK from Amazon now.

Calm is a sign of a storm and that’s what is going to happen with Samsung’s fans when Samsung Galaxy A71 will arrive on stores worldwide including the UK. This gorgeously designed state-of-the-art smartphone appears to be made for the youngest generation – especially for those who spend a handsome number of hours on their phones on a daily basis.

As Samsung Galaxy A71 is a part of Galaxy A-series which has already gained huge popularity back in 2019 with its Galaxy A40 and now Samsung seems to double-down it in 2020 with Galaxy A71 and its sibling A51. It’s the first smartphone with a huge display – ideal for watching videos and playing games.

Thanks to its super-powerful Chipset and a gigantic 6GB RAM, demanding apps run smoothly and flawlessly. How does it perform in each section and when will be getting our hands on one? Let’s find out the answers in our detailed Samsung Galaxy A71 Review below. 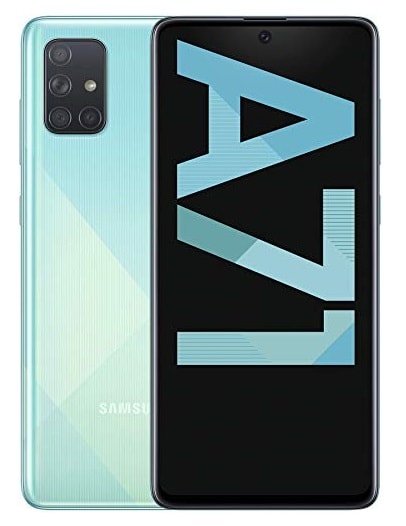 When will be an official Samsung Galaxy A71 release date in the UK? Things are pretty blurred, as of now, but it’s most likely to hit UK shelves somewhere early in February 2020.

Sources told NextGenPhone, it’s going to hold its position on stores across the world in first quarter 2020 – maybe alongside most-awaited Samsung Galaxy S11 which is ready to take place on February 11 during an event in San Francisco.

Currently, it’s available in Indonesia for pre-orders from Samsung’s official online store or on a number of other well-recognised stores named Lazada, JD.id, Shopee, and others.

The Samsung Galaxy A71 Price UK will be around £419, according to sources, which after conversion comes to around $550 in the United States and approx. $800 in Australia. If it’s to be believed, it’ll give a tough competition to its rivals with the features it’s loaded with.

Talking about Galaxy A71’s design first, it’s quite big and seems difficult to operate with a single hand – thanks to its biggest 6.7-inches display. This massive display has covered its entire front – but small bezels can be seen that don’t feel as bad as you imagine.

This time Samsung has used Infinity-O display which we have already seen on previously launched smartphones. It’s getting a punch-hole camera in the center of the phone at the top of the display to assist you in selfies and video calls. 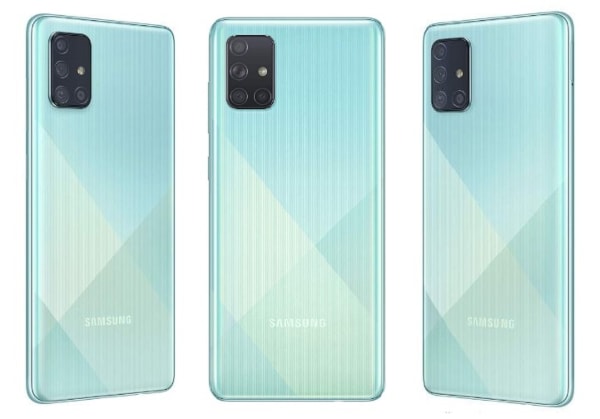 As compared to its sibling Galaxy A51, a punch-hole camera on the front on Galaxy A71 covers more space – even though both lenses are the same with the same capabilities. Super AMOLED Plus panel is being used which is not only lighter but thinner as well.

The phone measures 163.6 x 76 x 7.7 mm in dimensions and weighs only 179 grams. Volume rockers alongside a power button are holding their position on the right-hand-side of Galaxy A71 whereas 25W Fast Charging USB-C Port and Headphone Jack are positioned on the bottom.

Taking a look at its rear, it’s sporting a Prism effect which can also be seen on Galaxy A51, providing a bit of conspiracy and individuality. One can choose Galaxy A71 in a range of five sensational colours i.e. Pink, Blue, Silver, Crush Black, and Prism.

Very much like all other smartphones, Samsung Galaxy A71 is loaded with a Full HD+ display with a display size of 6.7-inches. The display is well-supported by the maximum resolution of 1080 x 2400 pixels at 393 PPI Density and an aspect ratio of 20:9.

That sounds enough for your enjoyment and you would definitely fall in love with 6.7-inches display – protected by Corning Gorilla Glass 3. 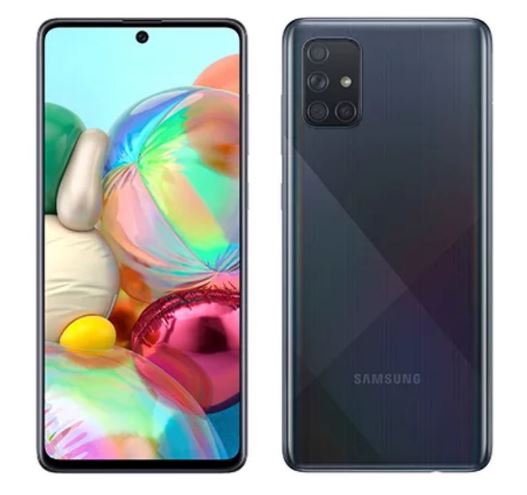 As mentioned above, Samsung has used an Infinity-O display technology in its Galaxy A71 which makes it quite user-friendly. What else? The phone is loaded with Super AMOLED Plus panel that appears to deliver punchy and vivid colours as compared to Super AMOLED Plus, which is offered in other Galaxy A series of smartphones.

Smartphones, nowadays, are getting advanced more and more day by day, trying to be equipped with a wide number of cameras and features. This masterpiece offered by Samsung is going to impress fans as well with its entirely-baked state-of-the-art camera configuration.

Outback, Samsung Galaxy A71 sports four cameras, and the main camera is blessed with a whopping 64MP sensor with an aperture of f/1.8 to capture memorable moments.

To capture images with a lot of colours and details, one can use its depth camera – comprising a 5MP camera lens with an aperture of f/2.2. In addition, rear camera configuration also includes another 5MP f/2.4 Macro camera sensor for capturing images of any small object – such as insects. 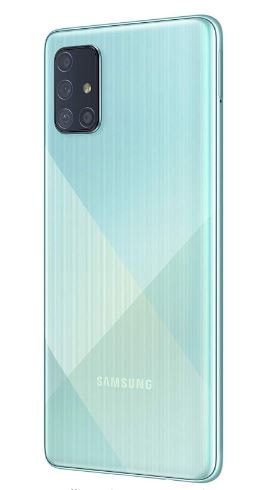 However, if you want to capture so many landscapes, Galaxy A71 has got you covered with a 12MP Ultra-wide camera sensor which has a 123-degree angle lens with an aperture of f/2.2.

Well, selfie lovers wouldn’t be disappointed – thanks to its powerful and exquisite 32MP camera sensor with f/2.2 aperture. Using this gorgeously designed Galaxy A71 smartphone, selfie lovers can capture their memorable moments with their nearest and dearest.

The Samsung Galaxy Note 10 Lite is not official yet but will house at least 6GB or 8GB RAM which appears to be equal to the Samsung Galaxy A71 smartphone. Thus, it’ll perform like a Note smartphone! The onboard memory will up to 128GB, however.

After getting your hands on Samsung Galaxy A71, you can store a vast number of media files, songs, videos, images, and important documents. And if you are looking for extra storage to store more data, you can insert a microSD card to expand it further up to 512GB. 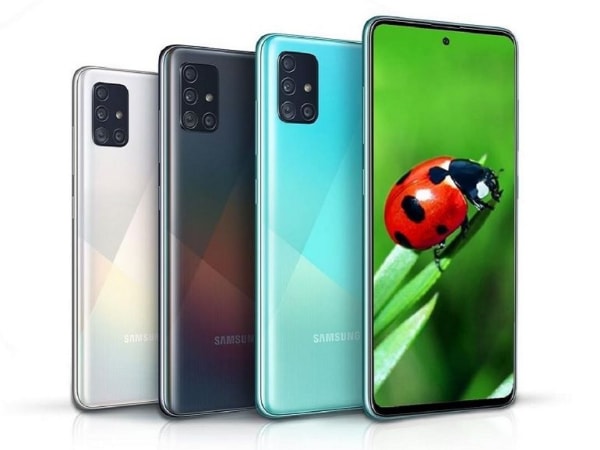 Unlike average mid-range smartphones, Samsung Galaxy A71 will enable users to use two SIMs and external microSD card simultaneously – thanks to its three separate slots. This is a small but handy feature which makes it stand out from a crowd and pricier competition like Galaxy Note 10 Plus.

In terms of performance, Galaxy A71 holds its position strongly among competitive smartphones in 2020. It’s carrying Qualcomm Snapdragon 730 Chipset based on 8 nanometer – smart enough to provide you glitch-free multitasking and smooth gaming experience when paired with 6GB/8GB RAM.

The Galaxy A71 is going to shine more with its massively offered battery. The handset has squeezed a gigantic 4500mAh non-removable battery into it, which is, of course, bigger over Samsung’s flagship smartphone Galaxy S10 Plus and Galaxy Note 10 Plus – offered with 4100mAh and 4300mAh batteries, respectively.

The battery is yet to be tested by different online sources – therefore, it’s too prompt to say how long will it last upon a single charge. However, we are very much hopeful to get at least 2 days’ juice before putting it on charging.

Besides, Galaxy A71 is loaded with the updated mechanism when it comes to connectivity. One will be able to enjoy Bluetooth v5.0 as well as Wi-Fi 802.11, 3G, 4G, GPS, and USB Type-C.

The phone is programmed too with smart sensors – for instance, on-screen fingerprint scanner, proximity sensor, accelerometer sensor, ambient light, face recognition, gyroscope, and compass. All these smart sensors wouldn’t only make it quite safe but make your life a bit easier too.

Battery issue. It’s not charging as super-fast charging at one point. It’s charging up to 82% sometimes 88% then suddenly the percentage is not increasing. It stay the same. Not moving that charging from that. And if I m once take off the cable from the port of phone put it again the same time it started charging super fast. Not getting what to do…? Pls, let me know if someone give the correct solution for that..? #samsunggalaxya71 @samasung