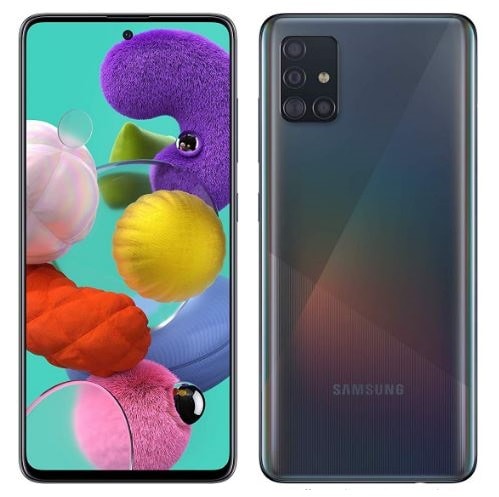 A Surprising Phone with Huge Progress in Camera, Display and Overall Performance.

At first glance, Galaxy A51 seems a lot like Galaxy A50 but as it’s a refined upgrade and it’ll be a successor in sales worldwide. It’s gorgeous enough to stand and shine in the mid-range segment in 2020 thanks to its numerous eye-catching features at unmatched rates.

It has arrived in UK stores officially and you can get an advantage of Amazon.co.uk to Buy Samsung Galaxy A51 in the UK at a lower cost. We have too listed Galaxy A51 smartphone here from Amazon for your convenience to grab one with less hassle.

With an official announcement of gorgeous smartphones i.e. Samsung Galaxy A51 and Galaxy A71, Samsung’s Galaxy A-series has touched new heights and turned the company’s fortunes worldwide in the budget and mid-range market.

The Galaxy A51 and other devices under A-series feel like a flagship smartphone with quite a few missing details which are, frankly speaking, not really noticeable.

While all other major smartphone brands seem to go off for a vacation with Qualcomm’s latest and powerful chipset but Samsung is consistently launching smartphones one after another. The Galaxy A51 alongside A71 will show how good Samsung’s A-series has become in a short span of time.

With a punch-hole camera, massive bezel-free display and marvellous build quality wouldn’t let you consider buying any other smartphone. Let us admit that it’s a lite version of flagship device Galaxy Note 10 or maybe an upcoming Samsung Galaxy S11.

Now the question is, Samsung Galaxy A51 is really a worthy successor of its identical (design-wise) Galaxy A50? Is it capable enough to capture your memorable moments with details or provide you with a glitch-free performance all day long? You will find everything in our Samsung Galaxy A51 Review below: 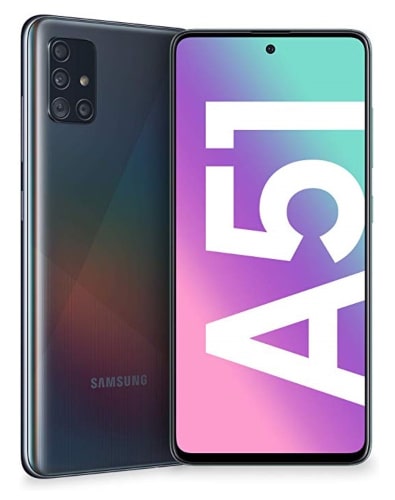 The most-awaited Samsung Galaxy A51 is now official and available on stores across the UK to get your hands on. The official Samsung Galaxy A51 release date in the UK was February 7th, 2020 and well-recognised UK stores i.e. Amazon.co.uk and Clove.co.uk have got it on their shelves in multiple colours like White, Blue, Pink and Prism Crush Black.

According to onboard features, a most notable rival of Samsung Galaxy A51 is Google Pixel 3a with the same price point but with a flagship-grade camera. The Google Pixel 3a doesn’t only sport a superior camera but promises smooth performance as well as a cleaner interface.

Another rival is named Apple iPhone 7 which was launched back in 2016 but still shines in terms of performance and most importantly, has access to Apple’s ecosystem. Although Galaxy A51 offers long-lasting battery and dazzling display – but lacks camera quality over iPhone 7.

Very much like its sibling Galaxy A71, Samsung Galaxy A51 shines in terms of design. Thanks to its bezel-less front and a uniform body, it yields Samsung’s mid-range design language to a new level. It’s free from a notch display but a small cutout in the middle on the top of the display that resembles Galaxy Note 10 Plus.

Although its design wouldn’t appeal many of us but a new design language will make a ton of difference. The small cutout improves your media viewing experience as the display is free from any interruption. It retails an external microSD card slot, a standard 3.5mm headphone jack and many other features for some reason.

The backside, however, has a different story like it’s having an L shape camera configuration outback whereas the rest is very plain with a classic Samsung logo which shines. Regardless of its plastic body, it feels good when holding in hands. Again, it’s a huge step taken by Samsung in the right direction to entice its fans and double the sales, obviously. 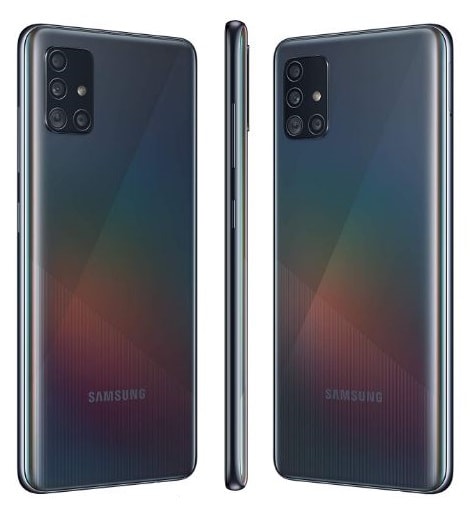 Samsung used a standard display in its Galaxy A51 but it’s, without a doubt, massive with a size of 6.5”, making it quite difficult to operate with a single hand. The display is well-supported by Super AMOLED Technology and a maximum resolution of 1080 x 2400 pixels.

Regardless of its standard display, Samsung always wins the hearts of its fans and shines at the top. Although Galaxy A51 has a shining and punchy display but it doesn’t go against the likes of Samsung Galaxy Note 10 or Galaxy S10 Plus.

However, colours are punchy, vivid and bright and are managed well as compared to most of its peers with the same price tag. Moreover, the contrast levels are great and the viewing angle is staller as well.

Samsung indeed worked hard in terms of a camera for its Samsung Galax A51 and, of course, Galaxy A71 both. This gorgeously designed beast is loaded with not four but five camera sensors – four are positioned on its rear whereas a single is available on the front in a punch-hole.

Three camera sensors have increased resolution alongside an entirely new camera added. The primary camera sensor is 48MP in size – partnered with a 12MP wide-angle lens, 5MP depth sensor, and 5MP macro camera. The front, on the other hand, is covered with a single 32MP selfie snapper to assist you in selfies and videos.

The sensors resolution, undoubtedly, marvellous and its overall camera module is quite, in fact, a lot better over Galaxy A50. Performance-wise, it captures stunning and bright images even in low-light. Captured images, according to sources, are loaded with natural colours and sharp enough.

The most interesting thing about the camera is that Galaxy A51 doesn’t struggle a lot in low-light and a dynamic range is greater too with sufficient light. The macro lens is a funny addition but it’s nice for enthusiasts. 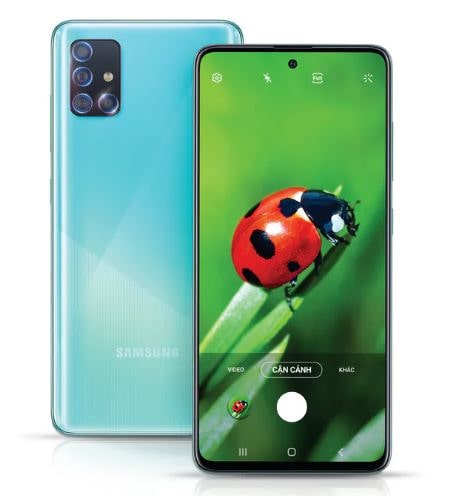 Samsung has an excellent experience running its mid-range devices with A-series. However, regardless of exquisite cameras and marvellous build, Samsung’s mid-range phones don’t really shine in terms of performance – thanks to their lower chipsets and low amount of RAM.

The Galaxy A51, however, is different with a good performance as far as its price point is concerned. Even though it’s not a flagship or premium smartphone, but the company’s own Exynos 9611 with up to 6GB RAM is more than enough to take you through multiple apps simultaneously and offer glitch-free performance when playing graphics-enriched games like PUBG Mobile.

The Mali-G72 MP3 GPU has taken the responsibility entirely manage its graphics whereas the Android 10 operating system lets you enjoy the whole new software experience with a handsome number of features.

Besides, it comes in two different tiers in terms of storage – 64GB and 128GB to choose from. And most interestingly, both variants have an option to add external microSD card alongside two SIMs at once to increase their storage further up to 512GB. 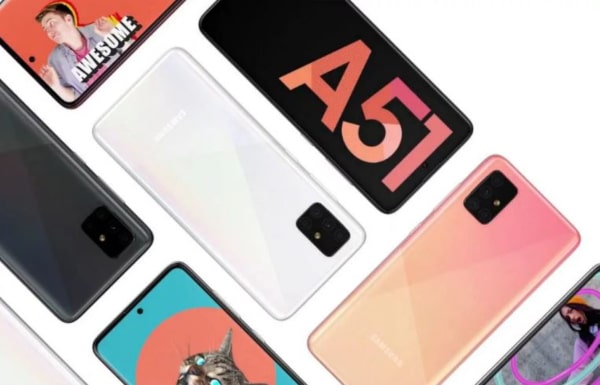 Details mentioned under the battery section are entirely based on online sources with their Samsung Galaxy A51 hands-on experience. While flagship devices offered by Samsung don’t shine really in terms of battery but the company’s mid-range devices are excellent and excelled in different tests.

The pretty sizeable 4000mAh battery of Galaxy A51 can easily last for a whole day if you are kind of medium to heavy user. However, sources after going through different tests, suggest that it can easily give you up to 6 hours of screen on time if you use it for social media-heavy and play some games for a short period.

It’s capable of 15W fast charging which is quite fast and restores juice back from 0% to 100% in less than two hours.