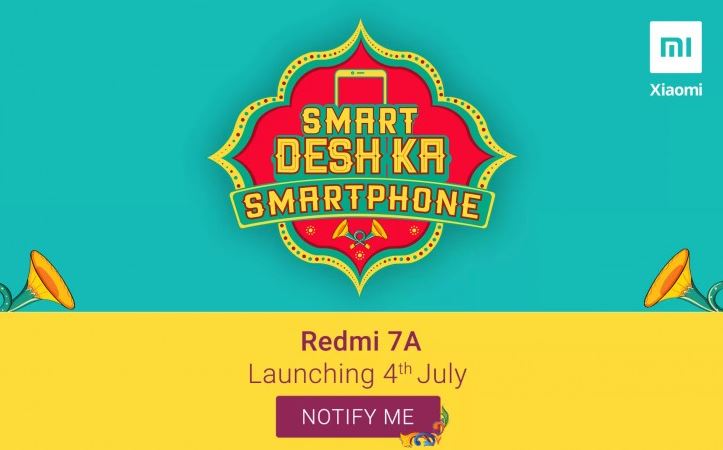 Xiaomi Redmi 7A to Arrive on Stores on July 4

The next Redmi A series smartphone launch date has now been verified by the Indian website “Flipkart”. Redmi 7A will be launched in India on 4 July, verified by the e-commerce giant with a dedicated page. It’s been more than a couple of days since then Xiaomi has been teasing the Redmi 7A in India. Xiaomi India announced that Redmi 7A will be launched in India in comparison with the international version with better and enhanced features.

Redmi 7A is available in a number of markets already, and the smartphone is now also going to India. It is anticipated that, in India, the Redmi 7A will come with dazzling features including Type-C port and IR blaster. The Redmi 7A seems to replace the Redmi 6A and that is something making it a budget-friendly smartphone.

The Redmi 7A is anticipated in India to cost approximately INR 6,000 which is already available in Europe in €100. The official price, however, is yet to be revealed by the company. The Redmi 7A will be on sale on Flipkart following the official launch in the country on 4 July.

Specs-wise, Redmi 7A comes loaded with a 5.4-inches IPS LCD display and it’s powered by Qualcomm Snapdragon 439 Chipset which is partnered with up to 3GB of RAM and up to 32GB of onboard storage. Camera-wise, it houses a 13MP camera on its back whereas on the front, it sports a 5MP camera. It runs on Android Pie 9.0 and 4000mAh battery keeps the lights on all day long.