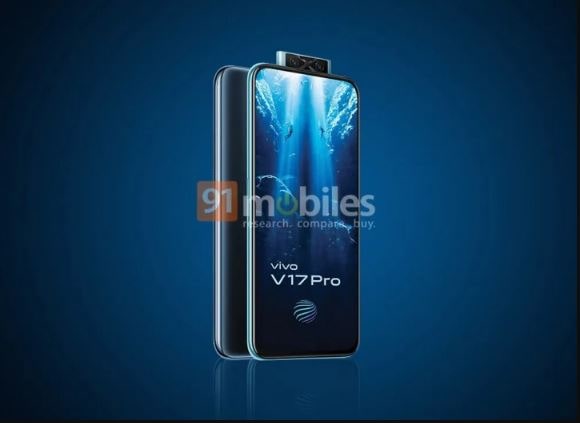 Vivo seems to debut its Vivo V17 smartphone series. Based on a recent report, Vivo’s gorgeous smartphone in this series V17 Pro will have as many as six cameras – out of them four are placed on its rear whereas two are holding their position inside a pop-up camera module.

A reliable source 91mobiles has revealed that Vivo V17 Pro will be debuted as the world’s first smartphone with a dual pop-up selfie camera smartphone.

Furthermore, Vivo V17 Pro’s promo images have revealed a notch-less display – very much like predecessor Vivo V15 Pro. An on-screen fingerprint scanner is embedded in the display too.

There are rounded corners on the V17 Pro, but it does not obviously show its back layout. The picture shows that the Quad Camera System is not positioned in the top left corner. The images of the phone earlier leaked indicate that the quad-camera system is positioned in the middle of the back panel.

It is speculated that improved zooming capabilities will be provided in the camera configuration. The images are also showing that the phone will be available in two different colours to choose from.

The publication learned from its source that retail employees will be trained on the Vivo V17 Pro from 9 September. It also indicated that by the end of September, it’ll start arriving in stores officially. However, as far as standard Vivo V17 is concerned, we are short on words on, for now.