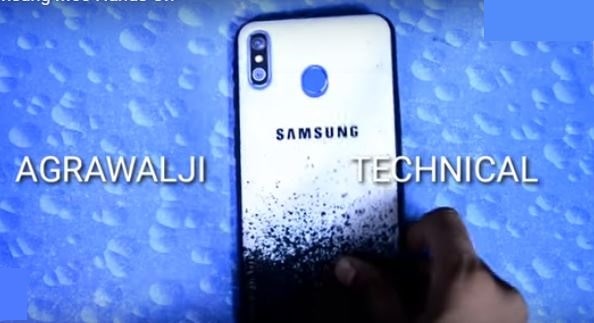 To take on the likes of Realme, Asus and Xiaomi, the world’s biggest smartphone brand Samsung launches its online-only M-series devices. Four smartphones have already been launched and now the latest leak hints another device. The Galaxy M60’s hands-on video has been appeared online – revealing its camera details and design.

Angry Agrawalji (a YouTuber) shared a hands-on video of Galaxy M60 in which we can see an Infinity-U Notched display and large bezels on the bottom of the handset. Seeing M60 with a notch display is quite surprising and M40 arrived with a punch-hole display. Rest of the details about the display aren’t known yet.

Aside from design, the hands-on video also shared a dual rear camera configuration – positioned vertically on the top left corner of the handset. The camera sensors are on the top and bottom and LED Flash is available in the center of these sensors.

The rear dual cameras consist of the 48MP main camera (Sony IMX 586) whereas the other one is 16MP. Whether the secondary 16MP camera is a telephoto or ultra-wide-angle lens, it’s not revealed in the video. However, expecting an ultra-wide-angle lens wouldn’t be wrong. Apart from the rear camera, the back of M60 is covered by a rear-mounted fingerprint scanner as well.

It’s important to note that Galaxy M60’s official details are yet to be revealed – therefore, we should take all the current details with a pinch of salt. As far as the official pricing and the release date is concerned, there is no word on it, for now.