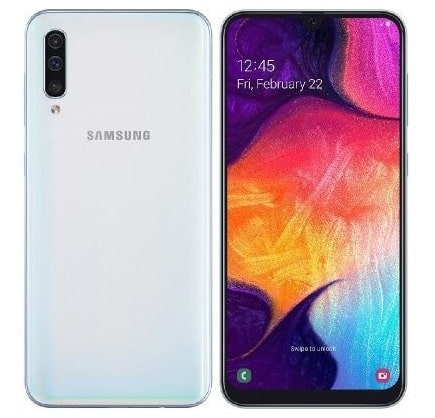 Last month at MWC (Mobile World Congress), Samsung announced its most appealing smartphone named Samsung Galaxy A50 which is now almost ready to hold its position on shelves across Europe. A Lithuanian Carrier, Tele2 has dropped the details about A50’s official release date and price.

Right now in Europe, Galaxy A50 is now up for pre-orders. With Black colour version, it will officially start landing on stores on March 18 whereas White hues will arrive on March 25. The Pink version, on the other hand, is set to be landed on April 1.

Without a doubt, all information may not be translated accurately entirely to what’s going to happen in European countries – but we have now an idea what to expect from Samsung Galaxy A50.

The handset is bearing a 6.4-inches AMOLED based display which is well-supported with a maximum resolution of 1080 x 2340 pixels, Exynos 9610 Chipset which will work as a brain, 4GB of RAM and 128GB of onboard memory to store loads of data.

Outback, it’ll be equipped with three cameras – 25MP + 8MP + 5MP. And to assist in selfies and video calls, it’ll be bringing a single and solid 25MP front-facing camera. A 4000mAh battery will things running all day long and it’ll run on Android Pie 9.0 out of the box.