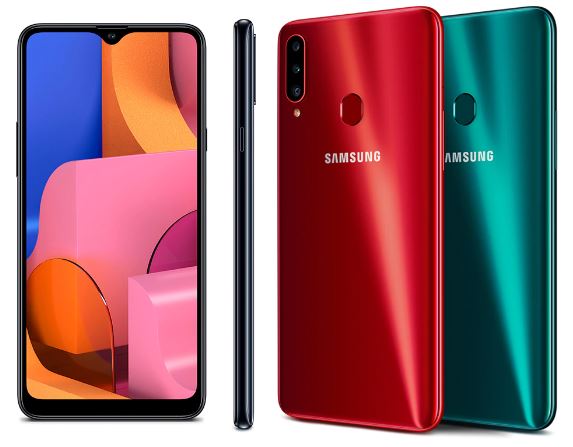 Samsung earlier announced its Galaxy A20s only for Malaysia during an event – and now, Samsung has announced that phone across the world. The smartphone is now available on shelves worldwide and can get his/her hands one after spending €150 only. It’s available in multiple colours, i.e. Green, Red, Blue, and Black.

Samsung designed its Galaxy A20s, especially for those who are budget-conscious but look for a flagship-level smartphone. The phone comprises a waterdrop-like notch that is also named Infinity-V display – according to Samsung.

The phone is housing an immersive 6.5-inches display with Full HD+ resolution, and it’s loaded with Qualcomm Snapdragon 450 Chipset – partnered with 3GB or 4GB of RAM.

In terms of onboard memory, Samsung Galaxy A20s is equipped with 32GB or 64GB of storage and with the help of a microSD card, it can be taken to the next level (up to 512GB).

The back panel of Galaxy A20s is equipped with a triple camera configuration – positioned on the top left corner. The camera setup carries a 13MP primary sensor, an 8MP ultrawide sensor, and a 5MP depth sensor.

The rear panel comprises a fingerprint scanner. And on the front, there is an 8MP selfie snapper with an aperture of f/2.0 – placed in a waterdrop notch to assist you in selfies and interestingly supports Face Unlock as well.

The handset runs on the Android 9.0 Pie operating system with Samsung’s own One UI on top. And a 4000mAh battery with 15W fast charging support helps you stay online all day long even with heavy usage.