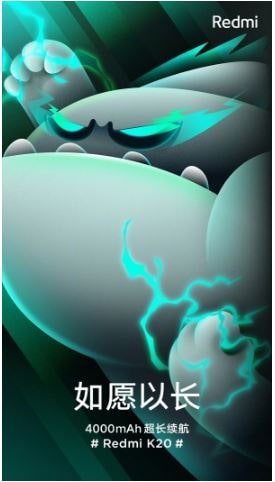 The Xiaomi Redmi offshoot is preparing to start its new Redmi K20 which is known as Killer 20 flagship smartphone. Redmi has a smartphone that offers high-end features at an aggressive price point with the Killer suffix. The company has shared teasers for a short time and showed the characteristics of the forthcoming device.

The Redmi K20 is supplied by a large battery of 4,000mAh thanks to the fresh shared teaser. The smartphone will also support 27W quick charging, which has not yet been confirmed – according to the past reports. The company had previously shared several teasers, apart from the existing teasers, which showed crucial device information such as the chipset, benchmark score, and camera resolution.

The Redmi K20 comes with the Snapdragon 855 SoC which is so far Qualcomm’s latest chipset around. The Octa Core CPU and Adreno GPU 640 are composed of the system. The chipset is also included on many smartphones, including OnePlus 7 Pro and Lenovo Z6 Pro GT. The device has an impressive 4,50,000+ AnTuTu score, approximately 20% more than its competitors.

The official case reports indicate that the next device has a triple rear camera configuration which is to be confirmed again. It is assured that a resolution of 48MP is provided for the main sensor in the setup.

Overall, the Redmi K20 appears to be an impressive device. However, we will have to wait for the official launch which is all set to be 28th of May, 2019. The smartphone is expected to have a price tag below 500 Dollars (INR 36000 Approx.).