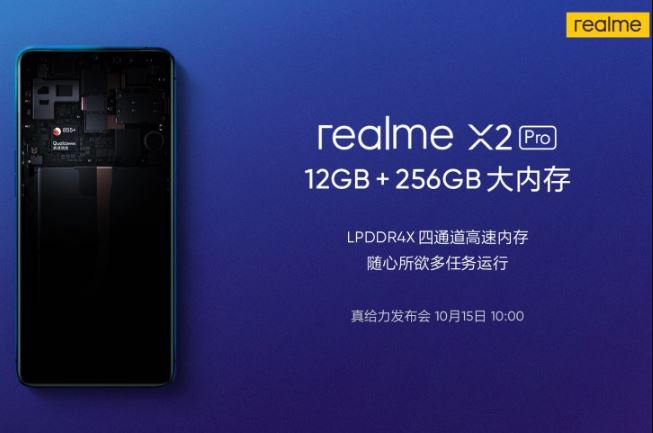 Realme has scheduled to launch Realme X2 Pro in China and European countries on October 15th, 2019. In the social media channels of Realme Europe and China, the company has been on the features of the smartphone consistently.

We have already mentioned in our previous posts that Realme X2 Pro will be powered by Qualcomm Snapdragon 885+ Chipset. Today, via Weibo, Realme China announced it would sell Realme X2 Pro with a hefty 12GB RAM and 256GB UFS 3.0 internal storage.

As compared to Realme’s previous generation, UFS 3.0 is offering up to 80% faster read speed, and interestingly it’s loaded with LPDDR4X RAM. Besides, Qualcomm Snapdragon 855+ Chipset powers the phone and delivers up to 2.96GHz clocking speeds. 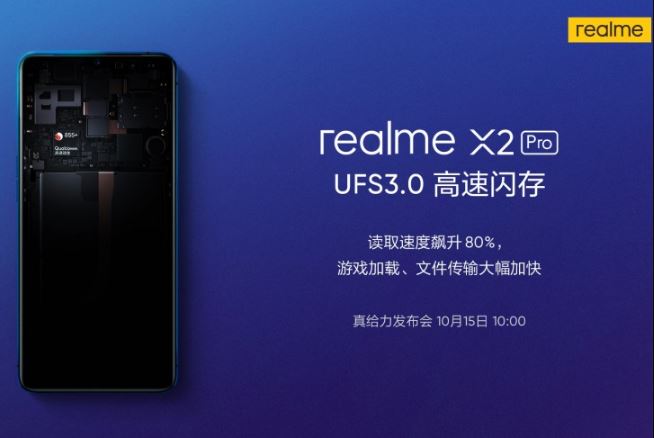 The Realme X2 Pro comes with an AMOLED 6.5-inches waterdrop-like screen that produces 1080 x 2340 pixels full HD+ resolution. However, it will have a 90Hz refresh rate, the exciting thing about the X2 Pro screen. A fingerprint scanner is embedded in the display as well. The fingerprint scanner is ultra-fast and in just 0.23 seconds, it unlocks the device, according to company.

To capture selfies and to assist you in videos, Realme X2 Pro is likely to hold a frontal shooter of 16MP. The back shell of the phone is fitted with a 64MP primary camera, joined by a 13MP ultra-wide lens, 8MP telephoto lens, and 2MP depth sensor. The phone is powered by a 4000mAh battery, supported by 50W SuperVOOC Flash Charging technology.

Old is gold! The Realme X2 Pro comes with a standard 3.5mm headphone jack and runs on Android Pie 9.0 operating system with the company’s own ColorOS 6. Unfortunately, it lacks a microSD card slot, and its official pricing details are under the wraps too. However, considering its state-of-the-art features and premium design, it seems that Realme X2 Pro will be a super-expensive smartphone.