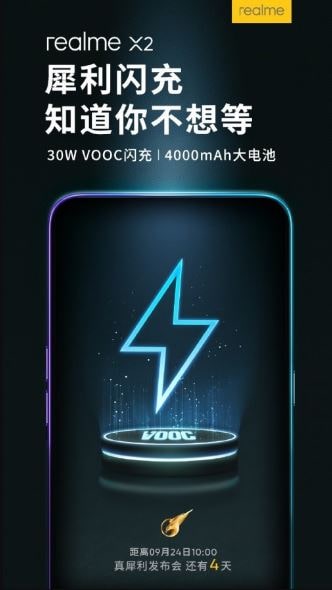 One of the key selling points of Realme X2 will be an addition of Oppo 30W VOOC 4.0 Flash charge that can restore juice back to the phone from 0% to 100% in less than 80 minutes wirelessly. The technology is QI compatible and can support a 5W or 10W charge when necessary.

Realme through its Weibo account confirmed that it’s will be loaded with Qualcomm Snapdragon 730G Chipset which is based on 8mm architecture and can provide glitch-free experience when playing games.

The phone is said to have a quad-camera configuration on its rear which will include a 64MP primary camera. And as for the front, it’s expected to comprise a 32MP selfie snapper to assist you in selfies and video calls.

For the rest of the details, we have to wait a little more. However, as far as a wide range of teasers is concerned, it wouldn’t be wrong to expect more information in the next couple of days.