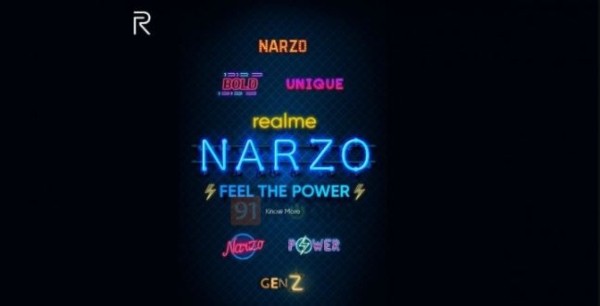 Realme to Launch Narzo Smartphone to Challenge Poco and Redmi

In a short span of time, Realme has become one of the fast-growing smartphone brands not only in India but in other countries as well. The company is surprising its audience with marvellous smartphones one after another and many other gadgets to give a tough competition to Xiaomi and other giants. The company recently launched the Realme 6 Series smartphone, and now Narzo series smartphones are ready to hit stores too.

Realme, through its official Twitter, managed to tease its upcoming Narzo Series smartphones. There was much speculation about the teaser as soon as it was found. It was not clear if it could be a tablet, a power bank, or an audio gadget.

However, a report clarified the problem and confirmed that it’s nothing but a smartphone, which is Realme’s new series and quite close to Pro, U, and X series of the company. And this latest smartphone series could soon be released in India.

It’s obvious from a Realme Narzo promotional teaser that the company’s main target is young people. The teaser looks flashy, and Gen Z text is outlined. The Narzo smartphone series may be intended to be youth-centric give the design of the company.

The device’s name may be changed near in the future, and for the time being, it’s not obvious. However, reports have stated that the company could launch its first Realme Narzo smartphone in two different variants. And undoubtedly, the Narzo smartphone series would be a serious threat for Poco and Redmi smartphones.

That’s all we know about Realme’s upcoming Narzo series smartphones. We all need to wait for a little further to get hands on more details.