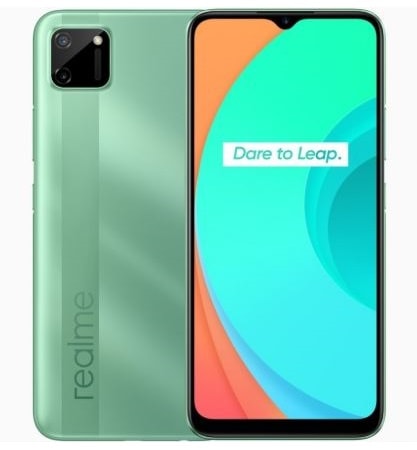 Realme C11 has already been launched in India, Malaysia and Indonesia. The company now is making its plans to launch C11 to Europe sooner. It’s most likely that this smartphone will head to Old Continent to give a tough time to Redmi 9C which was launched recently.

realme C11, realme' entry level offering will soon arrive in Europe.
Will be be available in Mint Green & Pepper Grey color options, and should cost between €100 – €120#realmeC11 pic.twitter.com/ycJ7NG8ePp

Although Realme itself didn’t announce anything related to the availability of C11 in Europe but by going through a tweet of Sudhanshu Ambhore, Realme C11 will be landing on European shelves soon in different colours to choose from – Mint Green and Pepper Gray.

It looks like Realme has planned to change the colours as in India, Realme C11 is available in Rich Green and Rich Gray colours.

The tweet further added that Realme C11 will set users back approx. €100 and €120. The Redmi 9C, on the other hand, with the same amount of RAM and ROM is already priced €119 in Europe.

Both Redmi 9C and upcoming Realme C11 have a lot of similarities in terms of design and internal components. Both devices appear to have almost the same size display with a waterdrop-notch and equipped with Helio G35 processor.

Moreover, these devices have the same amount of battery – 5000mAh and interestingly, the same rear camera design as well.

However, things become different when it comes to a number of camera sensors available. The Redmi 9C sports a trio-camera configuration alongside a rear-mounted fingerprint scanner whereas Realme C11 flaunts a dual-camera setup without a fingerprint scanner on its back.