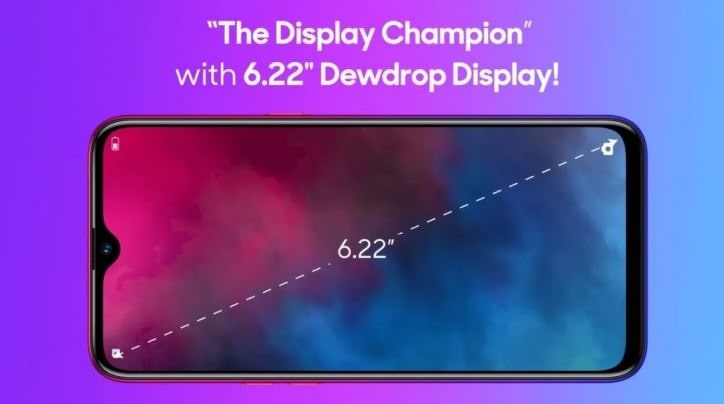 Realme 3i to House a 6.22-inches Display – Revealed by Realme

Realme has all set to launch its most-anticipated smartphone named Realme 3i alongside Realme X on July 15. Ahead of its official launch, Realme has been rolling out teasers one after another on Flipkart and now Realme teased that the handset will be loaded with 6.22-inches display.

The teaser also confirms a little amount of Chin at the bottom of the phone and 6.22-inches display size. Earlier, Realme announced that the handset will pack a 4230mAh battery and MediaTek Helio P60 Chipset.

The leading Indian e-commerce company Flipkart has updated its Realme 3i Teaser page – revealing that it’ll house a waterdrop-like notch and a 6.22-inches display. The company revealed the front panel of the phone after the back panel was revealed a couple of days back on Flipkart app.

Furthermore, this teaser has confirmed that the handset will be available to buy in a diamond cut gradient finish in Red and Blue options. And a teaser of back panel confirmed that the handset will have a dual-camera configuration – positioned vertically alongside an LED Flash. Besides, it’ll be powered by a 4230mAh non-removable battery and MediaTek Helio P60 Chipset.

Alongside Realme X, the Realme 3i is all set to be released across India on July 15 and a Geekbench listing is showing that it’ll sport a 4GB of RAM and will run on Android Pie 9.0 operating system. The handset is expected to be priced in between Realme C2 and Realme 3.