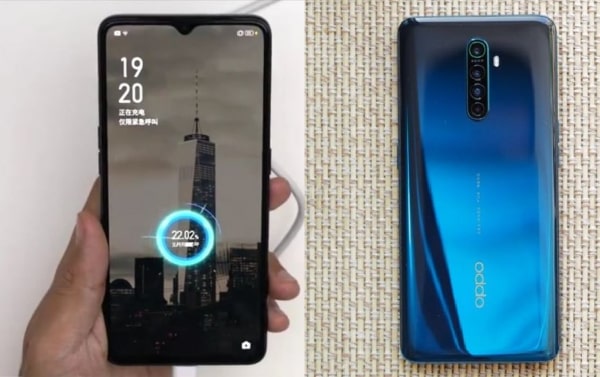 Oppo Reno 2 release date is right around the corner, and Reno Ace creates a lot of hype on the internet. Early reports and a raw spec sheet for Reno Ace had already been leaked ahead of its official launch, but now live image leaks have indicated the overall upcoming smartphone’s design and most-awaited fast-charging capabilities.

Oppo has used quite a few attention-grabbing innovations such as the first of its kind 65W Super VOOC 2.0 fast charging. The leaked images indicate that the smartphone can be charged up to 75% in less than 25 minutes – which means every increment in 10 seconds.

In other words, in less than 10 seconds, the 4000mAh battery will load from 15% to 16%! Remember that these figures have not been reached by any other competitor yet.

As the promo-images show, the Reno Ace is fitted with a 6.5-inch FHD+ AMOLED screen and a water-drop notch that houses a 16MP front-facing camera. When it comes to its rear, there is a quad-camera configuration -consisting of a 48MP primary camera, a 13MP telephoto camera, an 8MP ultrawide camera, and a 2MP depth sensor.

This phone will not only debut Oppo Super VOOC 2.0 but will also be the first Oppo to have a 90Hz display. Digging down inside the phone, it’ll be powered by a Qualcomm Snapdragon 855+ Chipset – partnered with 8GB of RAM and 128GB/256GB of onboard memory.

One will be able to pick it up in a choice of three different colours – Green, Blue, and Purple. A special-edition is expected to be launched by the company named Gundam variant which will be borrowed from “Mobile Suit Gundam” (a Japanese TV show).