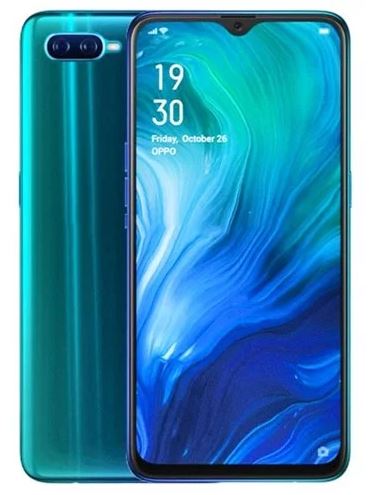 Another Marvellous Phone for Japanese with an eye-catching price tag and a pair of earphones in the box.

Oppo has just revealed its another smartphone named Oppo Reno A for the Japanese market. It’s the company’s second smartphone in Japan, and we have already got our hands on specifications and renders of the phone before its launch in Japan.

The Oppo Reno A comes loaded with an immersive 6.4-inches display with a maximum resolution of 2340 x 1080 pixels and a 91% screen-to-body ratio. A waterdrop notch lovers will be enticed by Reno A as there is a waterdrop notch – sporting a front-facing camera.

The phone is said to be loaded with Snapdragon 710 Chipset, which is partnered with 6GB of RAM and 64GB/128GB of onboard memory (expandable). According to the details, the 128GB variant of Oppo Reno A is exclusive to Rakuten Mobile only.

A dual-camera configuration is an available outback – consists of a 16MP primary camera, coupled with a 2MP depth sensor. Interestingly, Oppo Reno A is equipped with 22 scene recognitions and 416 automatic scene settings. The front-facing camera, on the other hand, is a 25MP AI camera alongside portrait and beauty mode.

It has a fingerprint scanner embedded into the display and NFC with support for FeliCa mobile payment. Dual-SIM (nano), 5.0, and OTG support are available too. Besides, Reno A has an IP7 waterproof and dustproof rating.

A USB Type C port can be used to load the 3600mAh battery of the phone. The software features like Game Boost 2.0 and the screen boost and frame boost for quicker touch response and smoother gameplay, respectively.

It’s likely to cost Japanese approx. 35,800 Yen (~$333) with a protective film already attached and a pair of earphones. It’ll go on sale on October 18 but one can pre-order it with immediate effects. It’ll be available to buy from Amazon Japan, Rakuten Mobile, Yamada, LinksMate, Fimo, Nojima, Joshin, and others.