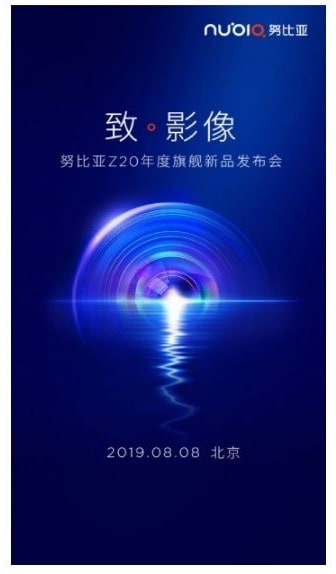 Nubia has all set to surprise its audience with a flagship phone named Nubia Z20 during an event on August 8th – confirmed through its Weibo channel. The unveiling date was confirmed by the released poster of the phone – however, its onboard specifications and features aren’t yet known. The handset will be a successor of last year’s Nubia Z18.

As mentioned, rumoured and leaks didn’t reveal its specifications and features yet but camera samples of Nubia Z20 have already appeared – confirming that it’ll be delivering impressive photo shooting experience. Besides, the released poster of the phone indicates that the main camera sensor will be the highlight of Nubia Z20.

According to some online sources, Nubia Z20 will be boasting a notch-less design alongside a pop-up front-facing camera configuration.

The already leaked image of the handset doesn’t reveal a lot on the design of the phone since the phone is encased in a protective cover. By taking a look at the revealed image, putting an educated guess of a full-screen design wouldn’t be wrong.

Well, all previous reports cannot be ignored – claiming that Nubia Z19 will be a successor of Nubia Z18 but the arrival of Nubia Z20 confirms that the company will skip the Nubia Z19 moniker. Being a flagship smartphone, it’s expected to be loaded with up to 8GB or 10GB of RAM, Android Pie 9.0, Snapdragon 855 Chipset and at least 6.5-inches display.