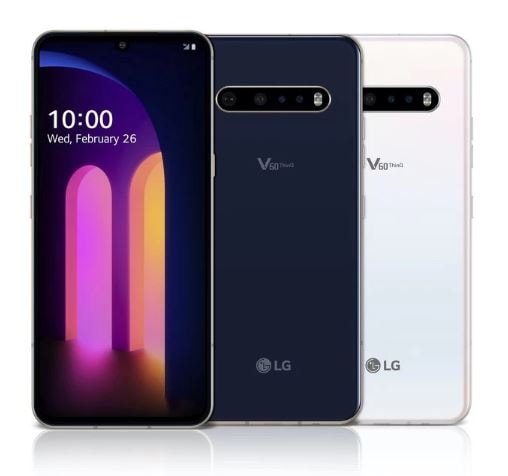 The upcoming LG’s V60 has already leaked online a couple of days earlier, showing a handsome number of specifications. And now ahead of its arrival, official LG’s V60 renders have leaked online.

These leaked renders are showing a clear image of LG V60 such as it’s loaded with a waterdrop-like notch on the front for housing a selfie camera to assist you in videos and selfies.

A single front-facing camera maybe a little bit disappointing as previously released LG V50S sports dual-front cameras whereas LG V50 houses a single camera sensor on the front. Aside from single selfie snapper, bezels of V60 are significantly slim, and there is an availability of an earpiece on the top bezel which is quite wider, showing the presence of dual speakers.

The left side of the phone is loaded with volume rockers and a dedicated Google Assistant, whereas a power button is holding its position on the right-hand side.

A Quad-camera configuration is available outback where sensors are positioned horizontally, and inside the phone, there is a whopping 5000mAh battery, which is a noteworthy upgrade over LG V50S’ 4000mAh battery. We are expecting it to be loaded with fast charging feature as well.

The phone was earlier rumoured to be launched in Mobile World Congress 2020 on February 24th, but it was cancelled.

Therefore, LG has announced it to be launched officially worldwide before March of 2020 ends, but pricing details are not yet revealed.