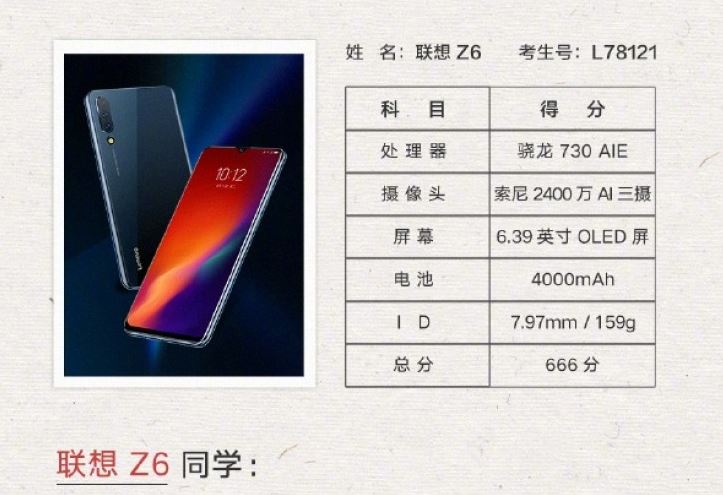 Lenovo Z6 to Arrive on Stores Officially on July 4

It’s been more than a month since we have been hearing about Lenovo Z6 but now it has been confirmed to be released. The Vice President of Lenovo Mr. Chang Cheng revealed that it’ll be launched on July 4th in China sharp 11:30 AM.

The handset will be loaded with an impressive 6.39-inches OLED display with a waterdrop-like notch and 93.1% screen-to-body ratio. It’ll be protected by a Corning Gorilla Glass and will come with HDR10 and CDI-P3 Wide colour gamut support.

The Lenovo Z6, according to the Vice President, comes with a sixth-gen on-screen fingerprint scanner which unlocks the handset in just 0.13 seconds.

Digging down inside the beast, it’s loaded with Qualcomm Snapdragon 730 Chipset whereas Lenovo Z6 Pro will be equipped with Snapdragon 855 Chipset. How much are the RAM and ROM? This something we are short on words on, for now.

The phone, however, comes with 4000mAh non-removable battery whereas three sensational cameras are holding their position outback – consist of a 24MP + 5MP + 8MP sensors with 8x hybrid zoom and 2x optical zoom support. And on the front, it’s equipped with a 16MP front-facing camera to assist you in video calls and selfies.