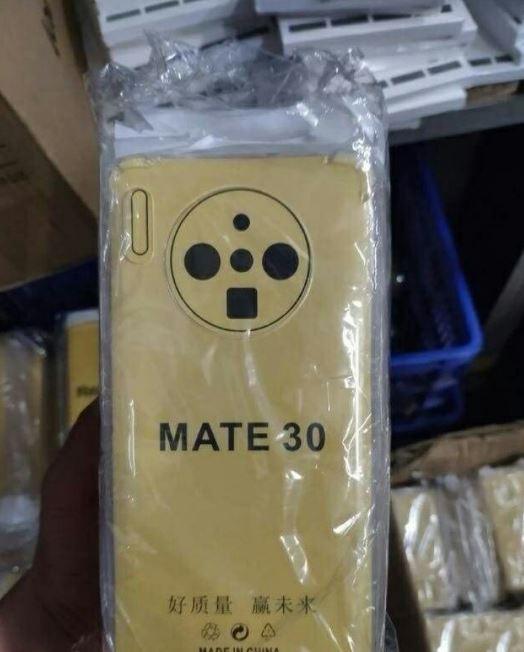 Another day and another case leak for Huawei’s upcoming Mate 30 (either it’s for Pro or not, we are short on words on). The phone is equipped with a circular camera module on its rear alongside a slim/thin vertical sliver which is, frankly speaking, not a surprise. It’s, obviously, not a surprise because we have already seen that circular module on a number of other case leaks.

The possibly interesting thing here is the suspected camera setup which the specific case manufacturer chose to scribble underneath the case on the cardboard. And scribble’s the most suitable verb, you know because it can be nothing more than a shock somewhere by a random employee and not based on authentic information.

Be noted that while case manufacturers usually receive phone schematics early, these are general surface models with little detail about components that needn’t be cut out.

The arrangement of the camera certainly differs from the most suggested ones. As far as we have heard so far, a combination of 40MP primary, 40MP ultra-wide and 8MP telephoto cameras will be added to the camera setup on the Mate 30 by a 3D ToF sensor. The 8MP telephoto camera might very well be the same 5x unit periscope from the Huawei P30 Pro. And it does have a square shape/form. Then again, it could readily be the beefy LED flasher in the form of a square.

The 3D TOF sensor might be in the lowest hole in the image. However, Huawei positioned this on a side strip next to the primary camera sensor of the P30 Pro, together with the LED flash. And as a similar piece appears to be on the Mate 30 too, we must wait for what all the additional holes in the main circle module are for.

Quite a few other features/specifications of Huawei Mate 30 alongside its Vanilla sibling include waterfall style display, an absence of a power button and volume rockers to accommodate the anticipated design rather than touch-sensitive areas. And according to IR blaster, there will be a new HiSilicon Kirin 990 Chipset and a UBS-C Port.