Eye-catching Rear Quad-camera Setup with Many other Enticing Features

Honor will be launching its another most-awaited smartphone on March 30th of 2020 – Honor 30S. We have already gone through a handsome number of leaks, rumours, and speculations about this beast in the past couple of days.

Now, according to the latest reports, it’ll be announced on March 30th of 2020 – thanks to the official confirmation of Honor through its Weibo account.

An official launch date poster has been shared by the company for its Honor 30S, in which it’s scheduled to be released on March 30th. However, its onboard features and specifications haven’t yet revealed by Honor. 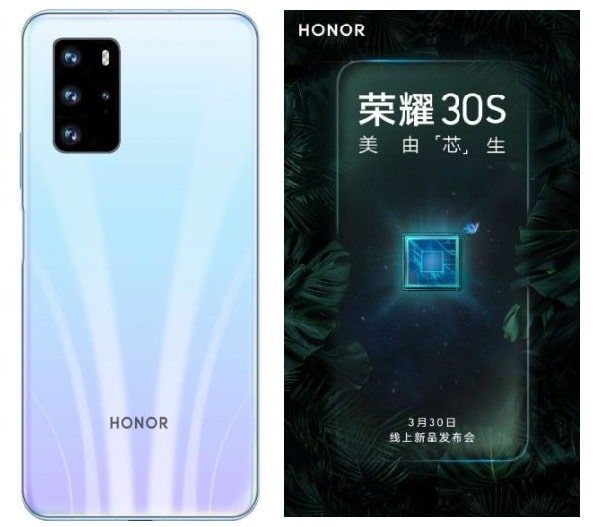 Previous reports also suggest that it’ll be loaded with Cortex-A77 CPU core – partnered with Mali-G77 GPU for managing graphics. Moreover, not only Honor 30S but Honor 10X and Honor 7 Series smartphones are also likely to sport the same chipset inside them. Most important of all, Kirin 820 Chipset is just a rumour as it’s yet to be confirmed by Honor.

The Honor 30S will leave Honor 20S quite behind that was launched back in September 2019. Although its specifications and features not yet confirmed but based on leak renders, it’ll be arriving on stores in two different colours – Orange and White gradient.

Previous rumours also confirmed that there would be a punch-hole on the front to sport the front-facing camera sensor. It’ll be featuring a rectangular-shaped quad-camera setup on its rear with an LED Flash. And at last, it’s said to have a support of 40W fast charging.

All in all, different online sources have speculated that Honor 30S will be an excellent and super-fancy smartphone, and users will be allowed to experience the latest and greatest technology without having to spend a fortune.